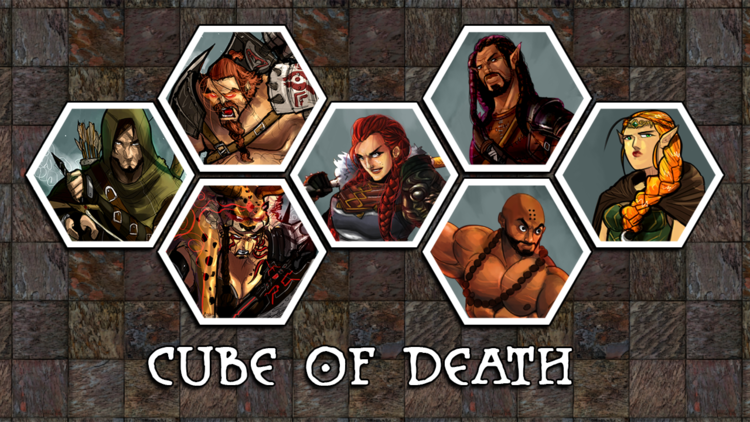 WHAT IS CUBE OF DEATH?

The short answer is, it’s a geek trivia card game with role-playing mechanics. Players go head-to-head matching their knowledge of geek trivia against one another. In addition, there are also Hero Cards that allow you to play a character. Every hero has life points and special abilities that they may use once per game. On top of that, there are Adventure Cards that allow the heroes to navigate through a dungeon. They will have to defeat traps, avoid hazards, and battle monsters, all while fighting each other. Last hero standing wins.

There are 368 cards and 10 life point sliders in each set. The game comes packaged in a sturdy two part box. You’ll get 800 trivia questions, 60 unique dungeon rooms with over 30 magic items, and 8 Heroes with their own special abilities.

Each player will choose a Hero to play. There are 8 heroes to choose from: Assassin, Berserker, Cleric, Druid, Monk, Ranger, and Warrior. Each hero has two special abilities they may use once per game. Abilities can do extra damage, avoid damage, avoid traps, allow help with answers, and so on. On the right side of the card are your hero’s life points and every hero gets 25 points. The game comes with card sliders that have a window on them. You simply slide up and down the card to indicate your hero’s current health. That way you don’t have to write down anything.

The questions are all over the map but they are all geek related. There are questions from every walk of geek culture. Topics include: Speed Racer, Voltron, Blade Runner, Star Wars, Star Trek, Conan, Tron, Physics, Chemistry, Pac Man, Norse Mythology, Robin Hood, X-Men, Superman, The Matrix, Harry Potter, Astronomy, Monopoly, Dark Wing Duck, Monty Python’s Holy Grail, Lord of the Rings, The Princess Bride, Krull, Elric, Wheel of Time, Indiana Jones, The Phantom, Buffy the Vampire Slayer, King Arthur, Beowulf, Spaceballs, Doctor Who, Back to the Future… and the list goes on, and on…

Blitz Mode
The most basic way to play is called Blitz Mode and only uses the Question Cards. It’s basically just a round-robin point taking game. The dealer will give each player 4 Basic, 2 Advanced, and 1 Expert card. Going around the table from the left of the dealer, each player will choose a card from their hand and any other player at the table. If the opponent gets the answer correct, they get the card to put into their point pile. If they get it incorrect, the player puts the card in their point pile. Play continues until all cards are used. Players simply count up the points on the cards (Basic = 1, Advanced = 2, Expert =4). Highest points wins!

Arena Mode
This style is played with two teams, generally of two or three players each, and a Game Master. Every round the Game Master draws a card and asks one of the teams the question on the card. If they get it right they get to roll 1d6 damage to the opposing team. If they get it wrong, they take 1d6 damage. Each team has 25 hit points and the first to run out of points loses the match and is eliminated. This version uses Question and Heroes cards.

Quest Mode
This is the full-on game that uses every aspect of the set: Question Cards, Adventure Cards, Hero Cards, Life Point Trackers, and 1d6. It’s a simple dungeon crawl where players resolve conflicts with trivia questions. Each player is presented with an adventure card on their turn. Each of these cards has an image of the room, a short description, and one of four types of challenges: Player vs Player (PvP), Encounter, Trap, or Hazard.

We’ve been telling you how awesome the game is but you shouldn’t just take our word for it, we’re trying to get your money. So, we sent out several copies of the prototype for people to play with along with running events of our own. Some of these people are game designers and may even be names you recognize. Here are what other people are saying about the game…

“Hours of entertainment, was fun for the whole family!”  -BJ Hensley, Game Designer for Playground Adventures
“The quality of this game is amazing. On par with anything you’d see in stores, but even better because it’s got that personal touch of a game made by a small company who doesn’t cut corners.” – Ben Bishop, Comic Book Artist
“Cube of Death is a fun trivia game with all the geek sh*t one needs to have a blast. Play with friends, play with industry legends, play with Santa. Lots of fun and an enjoyable social game.”-Jay Libby, Game Designer and owner Dilly Green Bean Games
“It not only tests your knowledge, it requires a bit of strategy and a bit of good luck with the dice. If you want a fast, easy, and fun game to pull out when friends come over, this is it! A definite recommend.”  – Angelia Parenteau, Total Confusion Convention (TotalCon)

Some of the characters I had drawn up for the podcast.

Cube of Death is part of the TSR PodCast Network and a lot of production went into it. We invited industry guests on every episode to compete against one another. When you have some time, you should check out the CoD PodCast. You can also find it on your favorite podcatcher. If you love geek trivia, you will love this podcast.

On August 13th we launched the Cube of Death Kickstarter. Unfortunately, we had a lower than needed turnout so we canceled the campaign on Aug 26th. We are already working on our relaunch strategy and plan to return in the next couple months 10x stronger. Please stay tuned to this web-page and our Facebook page for updates and to see and join in on the new promotional campaign.

We did a concept render of the box. This is not the final art but is the physical layout.